I have had many requests to post the remembrance I read at Sam's funeral, and am happy to share it.  -Alex

Sam once wrote “My life is nowhere near over.  I’ve only lived 13 years of it, but from these 13 years I think I have something to say.”  Now, 8 years later, I have to agree she had something to say for herself.

It seems almost pointless to stand up here and tell all of you what a wonderful person my sister was.  I think it was clear to everyone she came in contact with, that she was an amazing woman whose attributes cannot justly be put into words.

Growing up, Sam always stood out. When the caterer tried giving Sam a hotdog along with all the other 4 year olds at a police picnic, Sam quickly stopped him and insisted on having an Italian sausage with green peppers and onions.  She was the only girl on her football team, and baseball team, and sorry boys, but was better than most of you.

Her love of sports extended to the big leagues, and especially the Hawks.  She wore her Jeremy Roenick hat constantly.  She only took if off at the dinner table (by force, of course) and to shower.  And yes, she even slept with it on.

As she grew older, it remained apparent how remarkable of a person she was.  She wrote me once that even though it seems she’s getting older, and won’t need that older sister advice as much, she would still be stumped a lot.  There were a couple times in high school that she called me and told me she was crabby or sad, or just needed that big sis advice, to which I told her to hop in the car and drive to NIU to spend the night with me.  Mom and Dad, you thought she was down the street at Ness or Carly’s for a sleepover, but that’s beside the point.  What Sam didn’t know was that in coming to me for whatever advice I could possibly give, she was actually the one teaching me a lesson.  The way she handled situations and the maturity she showed, and even just her ability to reach out when she needed it, proved she never needed advice at all.  She was wise beyond her years.  As Bobby put it, she just got it.  She could see the big picture and always knew what was important in life.  She was very practical, and very reasonable.

After Sam got sick, her positive mentality and giving nature never changed.  It was never about her.  Sam made friends with everyone, and made them with ease.  Not only did she become great friends with her doctors and especially nurses, but even members of the hospital cleaning staff loved Sam and joked with her all day long when she was around.  Sam would say please and thank you to everyone, for everything.  She would thank you not only for the big things, but would thank her nurses for taking her blood pressure, and her family for simply keeping her company.

Sam did her best to not let the cancer slow her down.  Her friends meant so much to her and she worked very hard to spend so much time with them this past summer.  She was beyond thrilled whenever her body gave her the energy to go out for a night and be with those she loved.  While celebrating her friend’s birthday at a local establishment, Sam and I both ended up getting kicked out after some words were exchanged with the bartender.  On our way out, Sam picked up her drink, and while staring at the bartender, chugged it, and slammed the empty glass on the table.  That’s my girl.  Now maybe we shouldn’t be proud of getting thrown out, but for that moment, Sam got to act like, and was treated like, not a cancer patient, but a normal 21 year old girl.

As Sam neared the end, she was not afraid to talk about her life after death. My mom recently told Sam that “it’s not too late to pray for a miracle,” to which Sam replied, “Mom, you’ve had a miracle for 21 years, don’t get greedy.”  Sam strongly believed, and reminded us often, that even after she died, she will be here for us for as long as we need her to be.  She told us that whether it be through dreams, memories, or things that surround us, she will be here.  She worried more about those that loved her than she worried about herself.  She said we had the hard part and all she wanted was for us to one day laugh to ourselves when remembering the goofy things she said or did... of which there are many.  She told us that in times of need we could leave notes under our pillows, which might still be there in the morning, but she would have gotten the message.  She also told my dad he could just ask her for help, but that people would think he was crazy if they heard him talking to a dead person.

Sam wrote that our parents will walk across fire for her if her Gatorade was on the other side and she was thirsty. Mom and Dad, she spoke constantly of your selflessness and the amazing, constant care you gave her. She truely believed you are the World’s best parents.  Carisa, Sam always admired your passion, and how much you cared about the things you believe in, even if you believed in different things.  Tony, Sam has always been so proud of you, and was sad she wouldn’t be able to see you grow up to be a well rounded gentleman who knew how to treat women right, but she knows that you will.

Sam was an allstar athlete, a comedian, an entertainer, a teammate, and a proud Italian.

She loved good cooking, a good jam session on guitar, and a good laugh.

She was just as stunning in a prom dress as she was gorgeous in a t-shirt and baseball hat.  She had one dimple, and a heart of gold.

She was a fighter, a role model, a true inspiration, and she was tuff.

She was the younger version of her Nonnie, and a daughter to be proud of.  She was more than a sister, she was a best friend... to many.

Sam was a gift to all that knew her, and she will be forever missed.

Thank you for posting these amazing words. It is an honor to have them. This remembrance was a masterpiece. Alex, you are remarkable in creating this poignant tribute to your sister.
God bless you.

I have been following her blog since I saw her death notice in the paper. How I wish I knew her. She got it--she was an "old soul" with a heart of gold. It took me until I was 41 to get it--the day my husband was robbed, shot and killed and I had to raise 3 children on my own. The "tough times" in life are what build our character and Sam had a lot of character at birth. She was a "lucky one" although her years here were way to short. Your family was blessed for having her and she was blessed to have all of you. May you keep her memory going!

Dear Chris and Dolly,
As we told you, if you ever need anything,just call.
Sammy was such an inspiration to all of us.
At the service there was a slide show. I would like to get a copy for Meghan, since you were all a big part of her life. Kerry & Nancy O'Shaughnessy

Alex-What a wonderful tribute to Sam! I am sorry that I wasn't able to attend the service, but I so appreciate the fact that you posted your tribute. I know that she is still with you and the family and will continue to be with you in the days and years to come. She was a great kid to have in my kindergarten class and an ever greater person when she grew up! She will be missed by many! God bless you all.
Sue Lindsley

Alex- You did an amazing job when speaking about your sister at OLPH. I didn't know how you did it!
I know your mom and dad were very proud of you that day. And what a loving tribute it was. I am sure Sam was touched by every word. I will continue to keep you, Sam, and your family in my prayers.

Beautifully written. I can see Sam was a fighter with much determination. Thank you all for sharing this blog. It puts life into perspective. Life is short, live everyday like its your last and love those you know. God Bless Sam

Dear Cipolla Family,
My husband and I attended Sam's funeral mass and services. You should be so proud of all your children. We can't believe the strength of both your girls. Their tributes to Sam were AMAZING! What a TOUGH COOKIE Sam was. She reminds me of our dear friend Nikki Weinberg, who is 18 years old, and has been suffering with Ewings Sarcoma of the sacrum since she was diagnosed at the age of 15. These children and young adults with this horrible C- MONSTER disease amaze me with all their strength and positive attitude. I remember Sam when she worked softball concessions with me and my husband remembers Sam as being his best PE leader that he ever had. Her memory will live on forever at GBS. She was a beautiful, strong, and talented young lady. Our prayers are with your family. Cherish Sam's wonderful memories during this holiday season.
Jim & Judy Wolter & Family (GBS)

What a beautiful tribute to your sister. And what a loving , loving family you all are. God bless all of you, and may he give you the strength to get through this hard time this holiday season.

Anonymous said...
This comment has been removed by a blog administrator.
December 7, 2009 at 4:53 AM

Wow Alex, that was amazing!-lexi

I have only recently been reading this blog. She was a beautiful person and you all seem to be a great family. She certainly seems like a person you could be proud to call your own. I am sorry I didn't get the chance to know her. God bless all of you.

The 2 steps above can accurately determine your Comment connaître son groupe sanguin type. 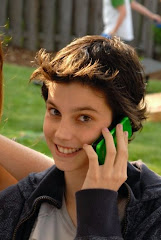